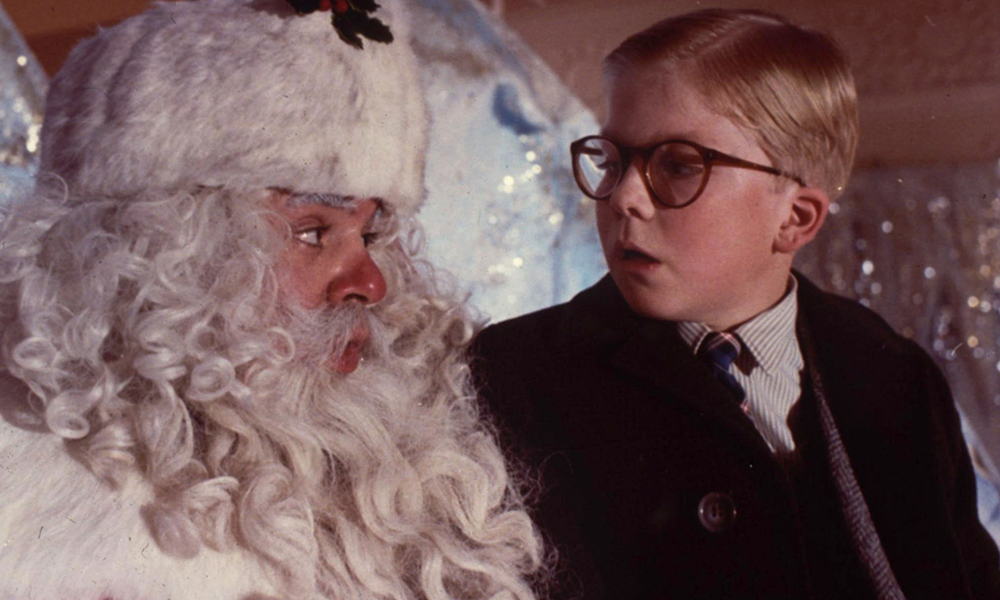 Sure the whole world doesn’t celebrate Christmas but who can’t get behind the themes of family, togetherness, giving, doing what’s right and most importantly a fat guy in a bright red suit that flies around. Below is the list of the Best Christmas Movies of all time.

Around 1985 comedian Jim Varney created the character of “Ernest”, a dim-witted good ol boy with a heart of gold. Between then and 1997 he would make 9 of these movies, from going to Africa to Jail to school to camp and so on. This caper in which he helps Santa Claus save Christmas is arguably one of the best. It is fun with lots of heart.

This is a fun, neighbor vs. neighbor, who can put up the best Christmas lights display tale. Matthew Broderick is the uptight self-proclaimed king of Christmas in his town. Everything was great until loud mouth, Danny Devito moves in next store with his own ideas of Christmas. Hijinks ensue and they continually one-up each other until things get way out of hand and then important life lessons are learned.

The first not-for-children flick on our list of Best Christmas Movies is about one crazy night. In Office Christmas Party, an office CEO is facing the death of his company and for some reason the only way to save it is by throwing one very x-rated rager. Jason Bateman is the cool voice of reason, TJ Miller is the bad idea factory and Jennifer Aniston is the evil sister that wants the company destroyed. Things get out of hand but nicely resolved in this not a waste of 105 minutes.

Sure this 1970 film is only 48 minutes long, but that doesn’t make it any less a classic. Maybe it is not technically a movie (at least 91 minutes) but given the spirit of this list, who cares. The film is a stop motion animation film about a mailman (voiced by Fred Astaire) who gives the history of Santa Claus to an unbelieving young boy.

The Polar Express is a long-standing children’s story about a magical train that takes the world’s children to the North Pole on Christmas Eve. Tom Hanks, who stars and produces, was determined to bring this tale to the big screen and worked with directing great Robert Zemeckis to use his stop motion specialty to do it. Friendship, bravery, and the spirit of Christmas are all key themes in this lovely children’s film.

This is based on the “A Christmas Carol” mechanic which you will see later on this list, but it has more of a Bill Murray comedy spin. Murray plays a high powered executive at a tv network who is trying to put on a live production of the aforementioned tale, and he is then visited by the ghosts of Christmas past, present and future to help turn his life around. Bill Murray comedy gold is throughout, which should be enough, but there is lots of heart and redemption too that make this one the classic it is.

Fred Claus takes the traditional Santa Character (Played by Paul Giamatti) and poses the question what if Santa had a bitter slacker no-good brother (Vince Vaughn). They are estranged for years and everything is fine until Fred gets into financial trouble. His brother Santa is willing to give him money to help if he moves to the North Pole and works on his operation. Fred shakes things up of coarse, but by the end is closer to his brother than ever before.

The shortest “movie” on this list is this classic tale clocking in at 25 minutes. That speaks to its greatness so much, in that it has accomplished greatness in about a 1/3 of the time that a full-length film gets. The classic characters you love are back in this lovely story about Charlie rebelling against the commercialism of Christmas and trying to find the true meaning of it.

This film is very similar to Santa Claus Is Comin’ To Town in that it is stop motion animation, from 50+ years ago, is short and for the same kind of target audience. This story focuses on the famed reindeer Rudolf who is seen as an outcast but overtime is accepted by his peers and ultimately saves the day. You don’t get stories about inclusion like this very often.

Another not for kids best Christmas movies entry is from the people that brought you This is the End and Neighbors, Seth Rogen and his Point Grey team. For ten years, three friends have had the tradition of meeting up on Christmas Eve and having one big drug-fueled party session. They are older now and the tradition is falling to the wayside. Seeing this, they all decide it is time for one last epic night.

The Best Man Holiday is the follow up to The Best Man and centers around a group of guys who have been friends for 15 years but been estranged and finally reconnect. Old rivalries and romantic flings pop up creating all sorts of drama but in the end it’s important to stick by your friends. This is a truly heartwarming story backed up by an all-star cast.

Tim Allen and Disney spawned a nice little Christmas franchise in 1994 about an anti-Christmas businessman who witnesses Santa fall of a roof, puts on his jacket and due to a magical legal situation becomes the next Santa. He spends the next year getting fatter and developing a love for sweets and child wonderment. Everyone thinks he is crazy but his son is his biggest supporter and that helps him carry on. Tim Allen is great and the film is really sweet. The two sequels were not as good, but all still great watches for the whole family.

#11 The Nightmare Before Christmas

Depending on the parent, this film may or may not be for your kids. It is a super creepy tale from the mind of Tim Burton that will haunt your nightmares, but at the same time it is full of wonderment and imagination. Jack Skellington, king of Halloween Town, finds Christmas Town and desperately tries to bring that joy back to his people. It doesn’t work out exactly as planned.

This R-Rated raunchy take on Christmas stars Billy Bob Thornton as a booze hound loser criminal that takes jobs as a mall Santa so he and his “elf” partner can rob them on Christmas Eve. This is the story of him starting from the bottom and over time realizing the error of his ways. Some of the one-liners are some of the funniest lines ever muttered in a movie and the redeeming qualities of Thorton are inspiring.

There is nothing like the hope of a young child saving the day to perk you up. Its New York and a struggling department store brings in the best mall center ever, he looks like Santa and he is so good with the kids. A rival store gets jealous and they play some dirty tricks to get the Santa locked up in a mental institution because he actually thinks he is the real Santa. The whole things ends up in court and result will have you believing in hope again.

This movie is kind of bad, but bad in a way that it is guilty pleasure good. Love actually follows eight different interwoven relationships in London in the lead up to Christmas. It hits on about all the drama you could imagine, and it is oh so satisfying. About every British all-star actor alive is in this baby, enjoy.

#07 The Grinch Who Stole Christmas

Based on a cartoon movie that is based on a Dr. Seuss book, everyone knows about the Grinch Who Stole Christmas. It is about a lonely, unhappy creature who wants everyone to be as unhappy as him. To achieve this he sets out to steal Christmas. Spoiler Alert: The people don’t care, they are just happy to have each other. This makes the Grinch’s heart to “grow three sizes that day.” Jim Carey kills it as the Grinch in this Ron Howard film.

While Home Alone may not be specifically about Christmas, it takes place during that time and is the major catalyst for several elements in the story. You also get some of the great cheesy themes like family being together during the holidays is the most important thing. 8-year old Kevin McCallister is mistakenly left home alone when his family goes off on a trip. It is fantastic at first, he can jump on the bed and eat junk food whenever he wants, but he soon turns lonely and misses his family. A troubling situation gets worse when he finds out some criminals are coming to rob his home, and he is the only one who can stop them.

The Griswalds are back for another adventure and this time it is surviving Christmas. The ever zany patriarch (played by Chevy Chase) is counting on a big bonus in order to put in a swimming pool but when that doesn’t happen he has to balance his internal turmoil with his entire crazy family coming to stay with him. The film is laugh out loud funny at every turn and mirrors each of our most hectic family Christmases ever.

When you think Christmas tradition, you probably think of the 1946 black and white film It’s a Wonderful Life. It has played in living rooms over the holiday for years and for good reason. George Bailey (Jimmy Stewart) is a charming and successful local fixture loved by all but when disaster strikes he questions everything and wishes for a world where he never existed. His guardian angel comes down to grant him that and George sees that the world would be an awful place without him and that so many people count on him. It is a very sweet story that holds up today, even 73 years later.

One of the most parodied film dynamics of all time is the Christmas Carol mechanic. The film is about a stubborn old man who is visited by three ghosts (past, present, future) in order to help show him the error of his ways before it is too late. There have been so many iterations of this type of film but the 1999 version with Patrick Stewart as Ebenezer Scrooge is solid.

“You’ll poke your eye out kid.” A Christmas Story is special in that there is no magical powers in this one, no ghosts, no helping Santa. It is just about a normal middle-class family in a normal middle-class neighborhood going through the Christmas season. You see the world through Ralphie, a young boy whose dream is to get a b-b-gun for Christmas. It is so relatable and so true that it is hard not to laugh and cry along with this little family.

You might argue that a more traditional Christmas movie should be in the #1 spot on the list of best Christmas movies, but honestly Elf ticks all the boxes. It is funny for kids and adults alike, and it has themes of family, acceptance and togetherness. Will Ferrell plays someone raised as an elf in the North Pole, but when it starts to become clear he is not a real elf, he is sent into the real world to find his real father. This is one of those flicks you can put on every year with the family and laugh and quote and be together.