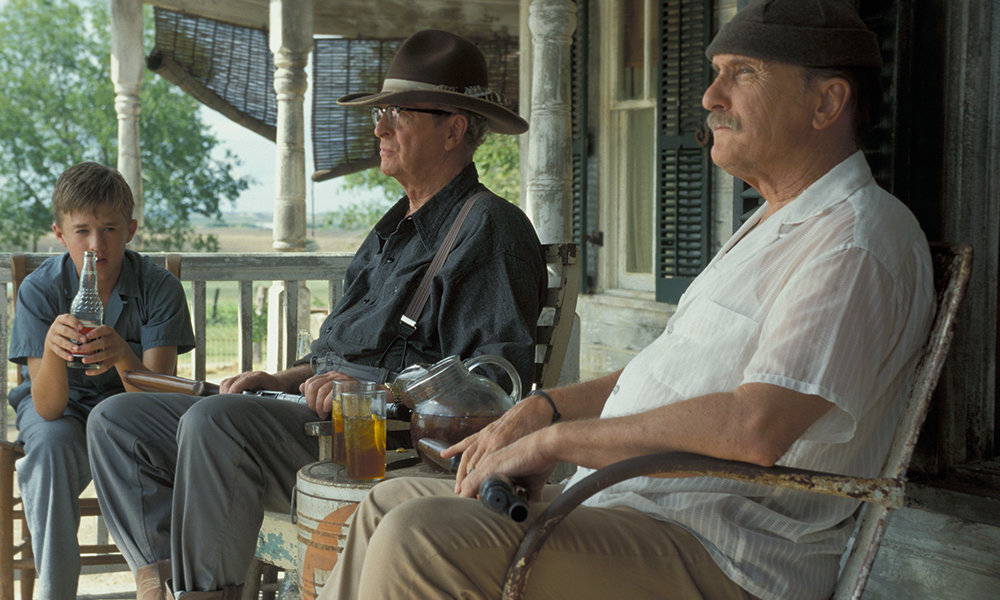 The term old-timer is not meant to be derogatory and these films prove it. Here is a list, from the very serious to very funny, of films that show older people can get it done too. Below please find the list of the 20 Best Old-Timer Movies of all time.

What should have been one of the greatest cast enables ever put together in Al Pacino, Christopher Walden and Alan Arkin, ended up just being so-so. The story is lacking but oh boy is it fun to see these three come together as former criminals out to do one final hooray and take down some young punks.

This one flew relatively under the radar, but it is definitely worth a watch. The great Michael Cain and Robert Duvall are grizzled yet childish old men just awaiting death. That is until a young Haley Joel Osmond comes to stay with them and teaches them how to live again.

#18 Trouble With The Curve

One trend you will notice on this list is Clint Eastwood. Oh, man, does that guy know how to act/direct “old-timer”. Probably his worst best was this story about him being one of the world’s best baseball scouts, but his bosses start to question his judgment in old age, so he needs to prove those SOBs wrong. Amy Adams gives a great performance as his daughter who must help him out. John Goodman and Justin Timberlake also give great supporting performances.

This is a Nancy Myers film (Somethings Got To Give, The Holiday, It’s Complicated) and it shows. It is sweet and warm with a little drama. Robert De Niro plays a delightful old man in retirement who is lost and needs something to fill his days. Anne Hathaway plays a shrill work-a-holic who is reluctant to hire De Niro as an intern. She of coarse does and the two learn from each other and make life better and yada yada. It is charming, watch it.

This 2017 film is actually a remake of 1979 film but we are not mad at it. Similar to Stand Up Guys, this brings together an all-star cast of old-timers for a crime caper, but this one does it better. Morgan Freeman, Michael Cain and Alan Arkin play lie long friends who need a way to take care of their families and decide to knock off a series of banks to do it.

Out of all the premises on this list, Get Low may be the oddest. The whole movie is about a Hermit (Robert Duvall) who is dead set on throwing his own funeral party while he is still alive. It can get weird at times but it is a nice little story, and you will experience all sorts of feelings. Bill Murray also comes through with a great little role.

Wild Hogs is a road trip buddy adventure film about old guys who decide they need a little more out of life before they kick the bucket. John Travolta, Tim Allen, Martin Lawrence and William H Macy, play a wannabe biker gang who travels across the US and gets into plenty of hijinks along the way. Of coarse hilarity ensues and lessons are learned. It is cheesy but nice.

The whole movie is old-timer jokes, older guys doing things that younger guys normally do. This is another Clint Eastwood joint, and another “lets put a bunch of all-star actors together and see what happens.” No matter what, it is fun to see Eastwood, Tommy Lee Jones, Donald Sutherland and Jame Garner play the roles of former astronauts that need to take one last launch into outer space before calling it quits.

This 1971 Comedy-Romance-Drama is a bit old but it holds up. Harold is a rich punk kid obsessed with death. At a funeral, he meets 70+ Maude. She changes his life in more ways that one and together they go on one life affirming journey. This movie is incredibly sweet and shows the importance of the older generation.

The Best Exotic Marigold Hotel (and its sequel) was huge because it came at a time when the older movie-going audience was undeserved and hungry for content that appealed to them. This one definitely gave them what they wanted. TBEMH follows a group of seniors who move to India to live in a luxury hotel only to learn on arrival that it is not that great. They make the best of it of coarse and lessons are learned. Judi Dench, Bill Nighy, Maggie Smith, Tom Wilkinson and more head up this incredibly robust cast of this Best Old-Timer movies slam dunk.

This was a little wacky zany indy movie that took off and became a cult classic. A group of seniors, led by Wilford Brimley, break into a pool that contains alien cocoons that give them a strange youthful vigor. Funny situation after funny situation occurs, and though a bit dated, it’s pretty great. A very young Ron Howard brought this gem to life just after finishing classics Splash and Night Shift.

This one had a bit of a cultural win in that after it came out “Bucket Lists”, or lists of things you want to accomplish before you kick the bucket, became all the rage. That type of list is now forever called that. This warm-hearted adventure starring Morgan Freeman and Jack Nicholson is just that. It is a movie about two guys who want to accomplish it all before dying. You will laugh, you will cry, but more importantly, you will feel better about living your best life.

We are back with more Clint Eastwood. In this one, based on a powerful article, Clint plays a very old farmer and Vietnam war vet. Through some interesting circumstances, he turns drug mule for a Mexican Cartel. It is a powerful and moving story that really makes you think.

Our last Clint Eastwood title on the list of Best Old-Timer Movies is the 2008 Gran Torino. Eastwood plays the ultimate “get off my lawn” grizzled old man in this story about a town slowly deteriorating into run-down and crime-ridden, and one man not willing to stand for it. Though he has a tough exterior, he is all heart and good on the inside and you really feel for him. The film is named after the lead’s prize possession, a 1972 Gran Torino.

in 1989 this film blew people away and turned race relations on its head. It was even awarded the greatest award in the land, Oscar for best picture. Morgan Freeman plays a chauffeur to an old Jewish woman played by Jessica Tandy. She of coarse is very racist and set in her ways, but over time they overcome their differences and become the closest of friends. You see their relationship evolves over time and it is really special.

Walter Matthau and Jack Lemmon are one of the greatest comedic pairs of all time. They blew people away back in 1968 in the original Odd Couple as young guys. They did some other stuff but then time passed and cinema went on. Then the world rejoiced when some smart producer decided to bring them back together but for more of an angry old man stint. The movie is hilarious and an absolute classic. This is what you should think of when you think best old-timer movies.

This Best Old-Timer Movies gem is something special in that we see a side of Jack Nicholson we have never seen, much more vulnerable. As he approaches retirement Warren Schmidt sets out to attend his estranged daughter’s wedding and learns a whole lot about himself on the way. A touching slice of life journey, the master of this type of story Alexander Payne (The Descendants, Nebraska, Sideways) brought this one to life.

With all the “one last adventure” old-timer movies out there, it was very refreshing to see one where the old guys and gals kick some real a** better than any young punks. RED stands for “Retired Extremely Dangerous” if that tells you anything. It is so fun to see this all-star ensemble of Bruce Willis, Morgan Freeman, John Malkovich and Helen Mirren be giant action stars with big guns and explosions. Skip the sequel though.

Besides the theme of Clint Eastwood, you probably notice the theme of people realizing their life has passed them by and they need one last big hurrah. Last Vegas is one of these, but it is by far the best of the list. It doesn’t come across as cheesy and the balance of comedy to warm feelings is top-notch. Morgan Freeman, Michael Douglas, Robert De Niro and Kevin Kline are fantastic and have wonderful chemistry.

Up isn’t just #1 on this list, it is easily one of the best movies of all time, and could be the best-animated film of all time. If you don’t cry in the first ten-minute montage of this film, you have no humanity. An old man loses his wife and with her any reason for living. He meets a hopeful young boy and together they go on one big adventure. You may be crying but they are tears of pure unadulterated joy. Thank you Pixar.