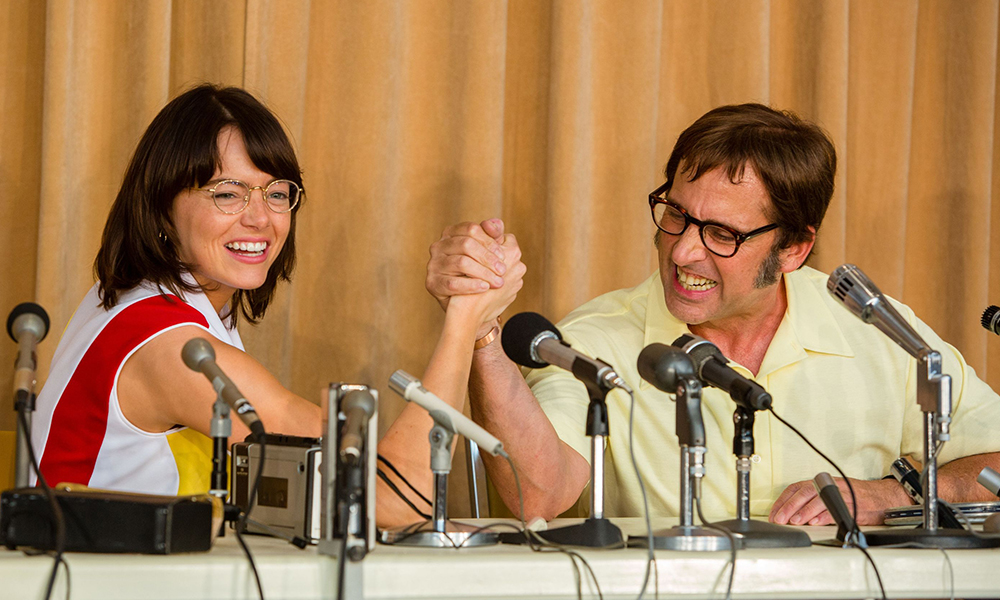 You know a good period sports movie, there is just a little magic in the air and oh boy lookout, that ragtag group of nobodies will be champions. They are inspirational AF and transcend time via everlasting glory. Below get ready for the definitive list of the best period sports movies of all time.

Invincible is based on the true-life story of a nobody who joined the eagles as a walk-on prospect who rose to greatness. Released in 2003 and taking place in the 1970s, Mark Wahlberg plays real-life Eagles player Vince Papale. He is just an everyday man but coach Dick Vermeil (Greg Kinnear) sees something in him and helps him become great.

American football started in the 1920s and looked pretty different from what it looks like today. Leatherheads, directed by George Clooney, dives into that glorious rise. John Krasinski plays an all-star college player that coach George Clooney finds and helps save his failing team and burgeoning league. The film is funny and charming and has a lovely cast that brings it to life.

Semi-Pro is more satirical comedy than based on a true story inspirational, but that’s ok. It’s 1976 and Will Ferrell is a one-hit-wonder musician who uses his profits to buy a basketball team in a league that is a competitor with the NBA. Turns out this league plans to merge with the NBA and why are taking all the teams except his. He convinces the league that it should be based on who has the best record and they agree. He then sets out to win it all and make it happen. The film is very much a Will Ferrell comedy, no surprises there, but nothing wrong with that.

#19 The Legend of Bagger Vance

Robert Redford directs Will Smith, Matt Damon and Charlize Theron in this 2000 sports drama set in the 1930s. That should be enough but we will continue. Matt Damon is Georgia’s golden boy, beloved by everyone. He seems to have it all but is traumatized when he heads off to war. When the Great Depression kicks off, his girlfriend (Theron) tries to host a half tournament and needs Damon to participate. He is not sure he can do it when a mysterious caddy (Smith) shows up and not only teaches him to find his golf game but his humanity again.

Easily the oldest film on our list of best period sports movies, Gentleman Jim is from 1942 and stars Errol Flynn (Robin Hood) as boxing champion James J. Corbett (1866–1933). Its the 1890s and boxing is not yet a real sport. A few guys get into some trouble and a judge wants to give boxing a better reputation. The film shows how this happens and the interesting moves and twists along the way.

the 2016 biopic Eddie the Eagle should be especially important to you if you are at all British. Mr. Eagle was Michael Edwards, the first Brit to represent in downhill skiing since 1928. Starring Taron Egerton as the lead, this film charts his journey to the 1988 olympics. The film was not a big box office hit but received great critical acclaim. In addition to Egerton, the film also stars Hugh Jackman and Christopher Walken.

We Are Marshall is a 2006 American historical drama biopic that depicts the aftermath of the 1970 plane crash that killed 37 football players on the Marshall University Thundering Herd football team, along with five coaches, two athletic trainers, the athletic director, 25 boosters, and a crew of five. Matthew McConaughey is head coach Jack Lengyel who must deal with it all. The film also stars Matthew Fox as assistant coach William “Red” Dawson. To see everyone come together and overcome this horrific tragedy is the true definition of inspiration.

The only horse racing film on our list of best period sports movies is the 2003 film Seabiscuit. The film was directed by Gary Ross and is so good that it was nominated for seven academy awards. During the Great Depression, Seabiscuit was an undersized and overlooked Thoroughbred racehorse. This is the story of how he came to be a champion and capture the heart of the world. Tobey Maguire, Jeff Bridges and Chris Cooper give career best performances.

Glory Road is a 2009 drama about 1966 college basketball when a Texas coach decides to stock his team with all African American players, something that was not done during this racist time. Josh Lucas plays real life UTEP coach Don Haskins. The film has a great arc and really dives into a major turning point in the history of racism.

The only tennis movie on our list of best period sports movies is the 2017 little indie film Battle of the Sexes. Oscar winners Emma Stone and Steve Steve Carell play tennis greats Billie Jean King and Bobby Riggs respectfully. The film focuses specifically on the lead up to a major publicity event where they would play each other to determine who was better at Tennis, Men or Woman. The film is small but the two actors in the lead positions are larger than life and worth the watch.

Billy Bob Thornton plays the beloved coach of a winning Texas high school. It is a brand new year where he is expected to win state and the pressure is on. Unfortunately in game 1 there is a major incident that sidelines the team and his hopes are diminished. The film deals with this small town pressure and expectations. This is more fiction than many of the other films on the list but it, and the tv show developed from the same book property are very amazing.

The film is a 2000 biopic based on the true story of African-American coach Herman Boone (Denzel Washington). This dramatic story follows his attempt to integrate the T. C. Williams High School football team in Alexandria, Virginia, in 1971. Racism rears its terrible head, but the story is sweet and the realizations are real.

Bull Durham is a 1988 American romantic comedy sports film partly based upon the minor-league baseball experiences of writer/director Ron Shelton and depicts the players and fans of the Durham Bulls, a minor-league baseball team in Durham, North Carolina. Kevin Costner stars as a veteran catcher brought in to teach rookie pitcher (Tim Robbins) about the game and making it to the major leagues. Their relationship is tested when Susan Sarandon shows up and gets in the middle of the two men. A great story about all the glory.

This 2005 drama from director Ron Howard, follows the life story of world heavyweight boxing champion James J. Braddock (Russel Crowe). Braddock is great but breaks his hand right around the beginning of the Great Depression and sidelined from boxing. He works manual labor but life is tough and there is not enough money to support his family. Through some random events, he gets another chance and shocks the world. With his inspiring rags to riches journey, he is dubbed “Cinderella Man”.

This 2003 drama follows the racial integration of first African American baseball player Jackie Robinson. The film is named after his number. Chadwick Boseman plays Robinson in 1945 when the Dodgers were looking to pick him up from the Kansas City Monarchs. A stunning look at the racism of the time and resilience from someone who keeps getting beaten down only to get back up to be beat down again.

This 1981 film would go on to win 4 Oscars including best picture and for good reason. This British drama tells the story of two-track athletes of the 1924 Olympics. Eric Liddell, is a devout Scottish Christian who runs for his God, and Harold Abrahams, is an English Jewish man who runs to overcome racist views towards him. The film is about these two men trying to coexist and understand the viewpoint of the other.

“There’s No Crying in Baseball” is one of the many iconic lines grizzled coach Tom Hanks yells at his female baseball team in wartime 1943. All the men are out fighting, so to save baseball the baseball league decides to launch a female version. All the men have their misogynist doubts but the women prove them wrong. In addition to Hanks, the line up includes Geena Davis, Madonna, Rosie O’Donnell, and Lori Petty.

Though Rush was a bomb because of how expensive it was, Ron Howard did make a pretty amazing film. The 2012 film centered on the Hunt–Lauda rivalry between two Formula One drivers, the British James Hunt (Chris Hemsworth) and the Austrian Niki Lauda (Daniel Brühl). The film is beautiful and large in scope and fantastically acted and directed.

Will Smith plays boxing great Muhammad Ali in this 2001 directed by the great Michael Mann (Heat, Collateral). The film spans the late 60s and early 70s, featuring his win of heavyweight title from Sonny Liston, his conversion to Islam, criticism of the Vietnam War, banishment from boxing because of it, his return to fight Joe Frazier in 1971, and, finally, his reclaiming the title from George Foreman in the Rumble in the Jungle fight. It touches on many key themes of the time including the great social and political upheaval in the US following the assassinations of Malcolm X and Martin Luther King Jr.

In 1980, the great Martin Scorsese brought this intense boxing story about legend Jake LaMotta to the big screen. Robert De Niro plays the lead, an Italian American boxer whose self-destructive and obsessive rage, animalistic appetite and sexual jealousy destroyed his relationship with his wife and family. Both the director and lead are in their heyday here and the film is top-notch. The film was nominated for 8 Oscars.

The Sandlot from 1993 is about as high-end nostalgia as you can. The film is about a baseball announcer recounting his youth of when he moved to a new town, struggled to meet friends and fell in with a rag tag group of misfits who played baseball every day on their neighborhood sandlot. The plot is about how the lead loses his father’s prized baseball and their plan to get it back, but it is really about good times with friends. This is a must-watch at any age if you have not seen.

The top-ranked film on the list of best period sports movies hands down goes to 1993 biopic Rudy. Sean Astin is Daniel “Rudy” Ruettiger, a bright-eyed kid with more heart than some small cities. All he wanted to do was play football for Notre Dame but he wasn’t big enough. He worked so hard against all the odds but he did it! If you ever want to feel good about life and feel like you can do it, watch this movie.