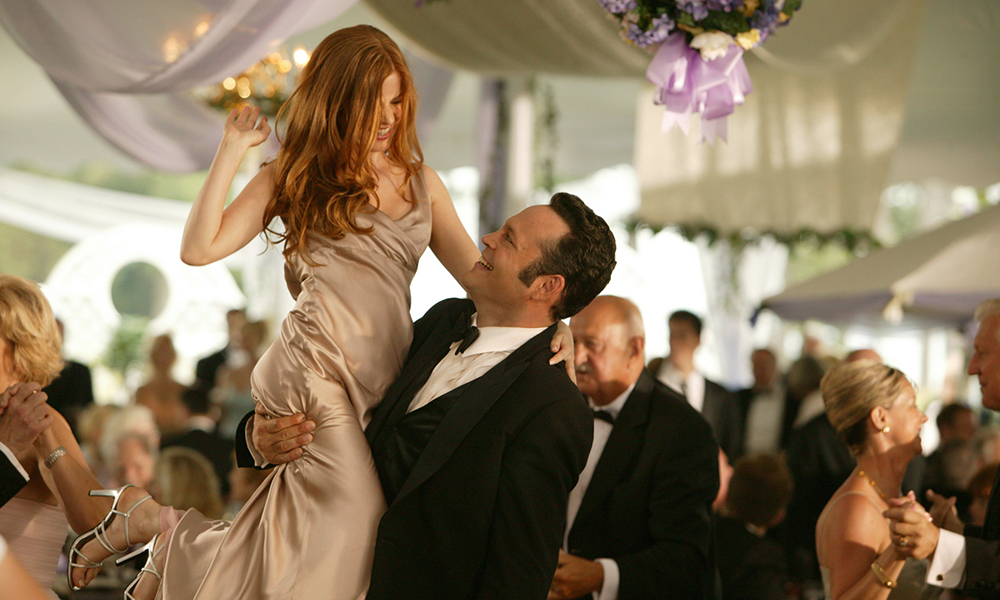 Weddings can be one of the most stressful and one of the most joyous times of your life and film has definitely taken advantage of those emotions. From love happening all around to a bridezilla or two, these movies make us laugh and cry, sometimes at the same time. Below is the definitive list of the best Wedding Movies of All Time.

This one is great because you have two amazing leads who just go at each other the whole time, one-upping each other over and over. Kate Hudson and Anne Hathaway are best friends that set their wedding on the same date, of coarse turning them into enemies. This is not the best movie but if it is what you are looking for, it is perfect.

Another churned out Kevin Hart comedy is the 2015 The Wedding Ringer. Josh Gad plays a lovable loser who needs help to stock his wedding with groomsmen. Luckily Hart runs a business in that department and comes on board. Exactly what you would expect to happen happens, with some mildly to actually funny jokes. Again, at this end of the list I would not run out to see this, but it is a guilty pleasure random at home watch for sure.

Patrick Dempsey used to be a really nerdy actor in the 80s (Can’t Buy Me Love) but then this really good looking dude showed up on the tv show Grey’s Anatomy and turns out it was him. He parlayed that into a few lovely films, this being one of them. He is super in the friend zone with Michelle Monaghan, who he loves. She tells him she is getting married and she wants him to be her made of honor. Things get real and Dempsey realizes he needs to do something before he loses her forever.

Before Katherine Heigl was pushed out of Hollywood, she made three solid movies, this is one of them. Heigl plays a bridesmaid to 27 different friends without having anyone of her own. Next is her sister’s wedding and something needs to be done, especially since she is into the guy. This is certainly a solid watch and a role Heigl was born to play.

Its Jennifer Lopez and Matthew McConaughey in a rom-com, what else do you need? J-Lo is, you guessed it, a wedding planner who is always making other people happy, but never focusing on herself. That all changes when she is saved by a runaway dumpster falls in love and then realizes he is the fiancé of a client. Whoops. Spoiler alert, everything turns out great, and you love it.

A fitting end to the American Pie series was to have the two characters who fumbled to find love in the first chapter finally get married some 13 years later. That is exactly what this movie is and it is as satisfying as you can imagine. Stifler, who has become the most iconic member of the bunch, also has a major arc. Through falling in love with January Jones, he learns to be less stifler like and more of an adult. The movie doesn’t match the cultural significance of the first one but it is a satisfying conclusion.

The 2nd R-Rated comedy on our list is a film about a real-life story of two brothers finding dates for a Hawaiian wedding via a very funny Craigslist ad. They wrote a book and that became this movie starring Zac Efron and Adam Devine as the two brothers. These guys are over the top bro-y and they hope to meet nice girls to make their mom happy. They don’t and they are tricked by the very sexy and wonderful Anna Kendrick and Aubrey Plaza. Things get very much out of control and you will laugh and laugh.

Jason Segel and Emily Blunt have a whirlwind relationship and get engaged right away. Unexpected situations keep coming up that delay the wedding however, and things start to get a bit strained. Chris Pratt also stars as Segel’s close friend. The tone is this laugh out loud at times and dry small witty things at others. The writing is smart and will not let you down.

Wedding movies are not always incredibly joyous as we learned with Rachel Getting Married. Anne Hathaway plays Kym who has substance abuse problems. She is released from rehab to attend the wedding of her sister Rachel (Rosemarie DeWitt). She is the black sheep of the family and everyone is on pins and needles around her. This poignant, Oscar-nominated film, explores the family dynamic and the vicious cycle of abuse.

The Best Man is a 1999 rom-com brought to the world by director Malcolm D. Lee (Girls Trip, Night School). Taye Diggs plays a soon to be super successful author but his life is in shambles and he decides to reunite with his college crew. Not just his friends, but a former love interest (Nia Long) as well. The film has an heavy hitter cast and includes names such as Morris Chestnut, Harold Perrineau, Terrence Howard, Monica Calhoun and Regina Hall. It makes you want to connect with old friends yourself. A slam dunk entry to the list of best wedding movies.

This one is a bit of a traditional role reversal. Sandra Bullock plays a ballbusting executive and Ryan Reynolds plays her pushover employee. Turns out Bullock is Canadian and needs someone to marry her so she can stay in the country. Reynolds is that guy and he has a hell of a time keeping the secret while putting up with this very difficult person. Like in all rom-coms they move past their differences and come together. The film was a huge success and one of the highest grossing rom-coms of all time.

Toni Collette plays the socially awkward Muriel whose dream is to have a glorious wedding and escape her little town and life. She has terrible friends who give her a hard time, but they all have their own problems. There are lots of dramatic moments as well as many humourous moments but at the end, everything very smartly comes full circle and Muriel gets what she ultimately deserved.

Julia Roberts is best friends with Dermot Mulroney. He tells her that he is marrying Cameron Diaz, and it is this moment that she realizes that she actually loves him too. Roberts sets out on a plan to get him back, but it is hard because she doesn’t want to squash his happiness or hurt the fiancé who is an absolute delight. This was an A-list movie for 1997 and it has the big production value and style to back it up.

#08 Four Weddings and a Funeral

This 1994 comedy-drama romance was nominated for two Oscars including best picture. It stars Hugh Grant, Andie MacDowell, James Fleet. Grant is a forever bachelor but over the course of five social occasions, he must consider the notion that he may have discovered love. This entry to the list of best wedding movies will make you feel all the feelings.

Finally, we get to a musical. Based on the musical stylings of Swedish pop band Abba, this movie would go on to be an absolute box office smash, grossing $600+ million. Amanda Seyfried is a young girl who is getting married and she wants her father, who she doesn’t know, there. Meryl Streep is her mother and she determines it is one of three guys. She secretly invites them out under false pretenses to trick them until she can figure it out. The three men are acting champions – Pierce Brosnan, Colin Firth and Stellan Skarsgård.

Adam Sandler was super hot in the nineties. He mainly did you over the top stuff like Happy Gilmore and Billy Madison, but also on his hits list of the time was one more sweet romanic comedy, The Wedding Singer. Sandler stars as a wedding singer who loves everything about marriage and helping people find love until he himself gets left at the altar. He becomes sad and not exactly the best wedding singer, but the waitress at the venue (Drew Barrymore) helps him get on his feet. Sandler and Barrymore have great chemistry, which is probably why they teamed up for several rom-coms after this one.

The old tradition is that the father of a girl is the one who is supposed to pay for the wedding. This film captures that unbridled horror and heart-wrenching joy that might come along with that. Steve Martin is a simple man just finishing up raising his lovely family. He is scared of losing his daughter but knows it is an inevitability. She reveals that she is engaged and he wants to give her an absolute dream wedding. Things go plenty wrong but Steve Martin handles it all with his wholesome brand of humor.

This is the highest-grossing romantic comedy of all time at $370mm WW. And it came out over 15 years ago. And it was made for nothing. Nia Vardalos (who also wrote, loosely based on her life) stars as a woman from a very overbearing Greek family sho is starting to pressure her to get married to a nice Greek boy as she gets older. She just wants to live her life, but since her family is such a big part of her life, it is hard to avoid. She falls head over heels for John Corbett, but he’s not Greek, a very big problem.

After Pretty Women, Richard Gere and Julia Roberts had to re-team for another romantic comedy and that birthed the 1999 Runaway Bride. Roberts plays a woman who has almost been married many times but right when she walks down the aisle, she gets scared and runs away. Gere is a reporter who heads to her small little town to write a story about it. They of coarse have a magical banter and need to end up together. Spoiler alert, of coarse they do and everyone, ends up happy. Julia Roberts is an absolute treasure and this is one of her best.

Two friends (Owen Wilson and Vince Vaughn) have had the same tradition for years. Come wedding season, they do their research, come up with fake backstories and they crash as many weddings as they can. To them, these are the happiest events of all time, stocked with free food and drinks, but most importantly woman looking to chase that same feeling. Their lives are filled with one night stand after one-night stand and they start to realize it may not be enough. Everyone falls in love and everyone ends happily ever after in this runner up on the list of best wedding movies.

Bridesmaids is easily one of the funniest movies of all time. This raunchy R-Rated comedy from an all female cast was not done at the time and it blew everyone away. The film centers on Annie (Kristen Wiig), who suffers a series of misfortunes after being asked to serve as maid of honor for her best friend, Lillian (Maya Rudolph). The is oozing female talent with a supporting cast of Rose Byrne, Melissa McCarthy, Ellie Kemper and Wendi McLendon-Covey.