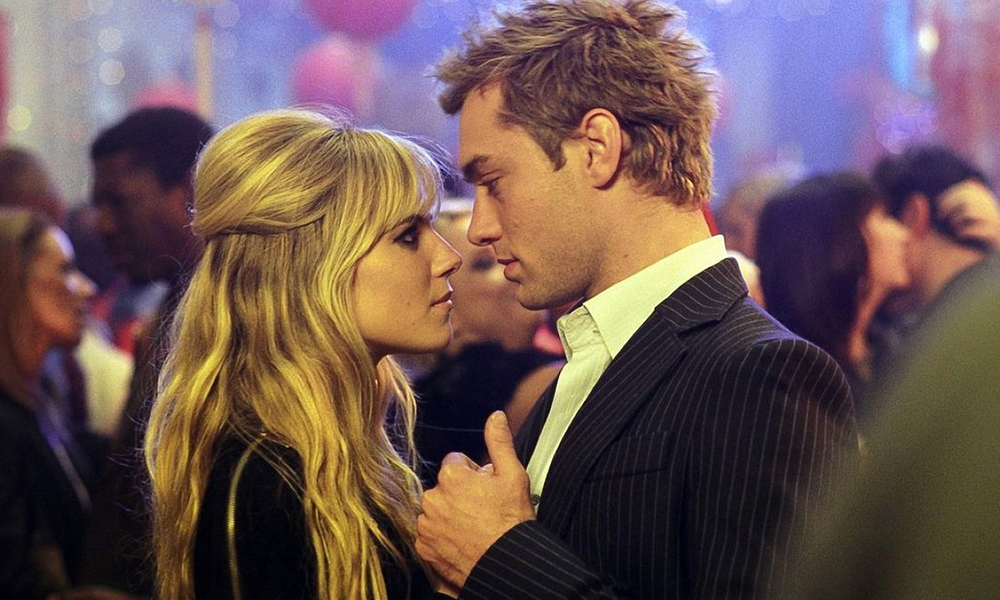 Womanizers tend to be those smooth talking confidence men who can usually get whatever they want just by using their charm. They also tend to be deeply unhappy until they find that special one, which does in fact tend to be the resolution to all the films on this list. Here is the definitive list of the best womanizer movies of all time.

In Ashton Kutcher’s brief film career, he made this funny sex comedy in 2009. A narcissistic gigolo (Kutcher) lives in LA, drifting from one relationship to another without a job or home. He preys on women who can provide for him. After meeting Samantha (Anne Heche) at a club he moves in with her, using his looks and sexual prowess to keep her happy. He doesn’t stop there though in brings many more woman into the mix. It gets increasingly more difficult and things don’t necessarily go as planned.

#22 Ghosts Of Girlfriends Past

Towards the end of Matthew McConaughey’s days of doing rom-coms, he did a solid entry opposite Jennifer Garner. McConaughey is a serial womanizer and all his exploits come to a head when he attends his brother’s wedding. Here he is visited by the “ghosts” of all his past girlfriends who each took their turn to explain why he is horrible. Very much a take on the classic “A Christmas Story” plot. Before it is too late, he needs to realize the error of his ways and settle down with a nice gal.

The film stars Heath Ledger, Sienna Miller and Jeremy Irons and tells the story of one of the first womanizer, Casanova. After failing to win the affection of the Venetian woman Francesca Bruni, he strives to discover the real meaning of love.

Don Juan DeMarco is a 1995 romantic comedy-drama film starring Johnny Depp as John DeMarco, a man who believes he is Don Juan, the greatest lover in the world. Depp is forced to go under treatment with a psychiatrist (Marlon Brando) to fix this. Depp ends up convincing most of the staff that it is true, and he ends up having a profound effect on all of their romantic lives.

The title says it all, Boomerang is about throwing a behavior out there and then it coming back to you. Eddie Murphy is a terrible womanizer who doesn’t care about anyone but himself. He is successful until he goes toe to toe with his new boss (Robin Givens) who is more of a deviant than he is.

This film was created to be an homage to the love films on the 60s and has a poppy, zany, over-the-top style. Renée Zellweger is a strong willed advice columnist who doesn’t believe in love. Ewan McGregor is the playboy journalist who is going to take her down. He is set to make her fall in love with him, but then the opposite happens. Taking place in the go-go New York 1960s, the film has a very interesting style and narrative.

Before This is Us was a smash TV show, Dan Fogelman brought the world this lovely slice of life romantic comedy. Steve Carrel is a middle aged man whose wife has an affair and leaves him. Lost in life, Carrel meets Ryan Gosling who is your classic ladies man womanizer and offers to help. You see their relationships develop and their ultimate quest for happiness. The stellar cast also includes Julianne Moore, Emma Stone, Marisa Tomei, and Kevin Bacon.

Hal (Jack Black) is about as shallow as they come, inner beauty meant nothing to him, only what was on the outside. With this attitude he makes one particular woman mad who casts a curse on him that he will only be able to see inner beauty. He shrugs it off and soon after meets a gorgeous woman (Gwyneth Paltrow) who is excited to go out with him. Turns out that the rest of the world sees her as a less than perfect 10, but Hal only sees her inner beauty. He doesn’t know this and is surprised by the looks and comments he gets. This film is his journey to figure out, that inner beauty is what is important. The movie is laugh out loud funny and from the same guys that brought you There’s Something About Mary.

Roger Dodger is a 2002 comedy-drama that explores relationships and more importantly sex. Campbell Scott plays a NY copywriter who just broke up with his girlfriend/boss and had his 16-year-old nephew (Jesse Eisenberg) come to stay with him. Turns out Eisenberg needs help picking up women and given the mood Scott is in, he promptly takes him out on a night on the town in search of sex.

The film is made up of an all-star cast of Ben Affleck, Jennifer Aniston, Drew Barrymore, Jennifer Connelly, Kevin Connolly, Bradley Cooper, Ginnifer Goodwin, Scarlett Johansson, and Justin Long and shows many different interwoven relationships in a quest for happiness. Each relationship has their issues, usually because of the different motivations and desires of the partner they choose to be with.

This 1987 gem is a poppy fun entry on the list of best womanizer movies. Very not serious, Robert Downey Jr is a smooth talking ladies man who never gets shot down. That is until he meets Molly Ringwald, a smart independent tour guide who beats this guy at his own game. The whole thing is a fun look at the evolution of their relationship.

Alfie Elkins (Jude Law) is a British limo driver and sex addict, who regularly has one-night-stands with beautiful women. He has many great relationships in his life, but takes them all for granted, like sleeping with a woman his best friend (Omar Epps) loves and used to date. He basically hits rock bottom and tops it off with being diagnosed with cancer. It is a misdiagnosis though and Alfie wants to do right with his second chance. It is not as easy as it seems as many of the tables in his life have turned on them, and many of the relationships he took for granted are now gone.

Gerard Butler is a washed up soccer star who reluctantly agrees to coach his son’s junior league school team. He attracts the attention of all the divorsed moms including Judy Greer, Catherine Zeta-Jones and Uma Thurman. Lots of triangles and interesting circumstances come up in this dramatic romantic comedy.

Bill Bellamy was a Def Jam comedy star and MTV VJ with plenty of swagger. That is why it made perfect sense for him to lead a film that was a how to on “how to be a player”. The film style is a break the forth wall talk to the camera about how to pick up women cut with Bellamy actually doing it. What starts out as a strong, well oiled machine, starts to break down when he catches feelings and things get complicated. A very strong window into late 90s culture and a fun throw away movie.

Sandra Bullock and Hugh Grant are on two different sides of a major real estate deal and the two could not be more different. Bullock is a quiet do-gooder preservation lawyer. Grant is a arrogant, stylish womanizing playboy, who is also quite naive. The two hate each other at first but Bullock wins him over and shows him the evil of his womanizing ways. The film is very predicable and cheesy, but if you want a nice rom-com where the d-bag guys looses, here you go.

Jack Nicholson has been a playboy all his life, charming any woman he meets into whatever situation he likes. He is getting older and increasingly lonely. Though he normally dates woman half his age, he meets one of their mothers (Diane Keaton) who is more his equal and someone who stimulates him in a way he never experienced. He is now the one chasing her, and she is not about to put up with any of his crap.

Ryan Phillippe and Sarah Michelle Gellar play very unhappy rich snob step siblings in this best womanizer movies gem. All they want is to make people as unhappy as them, especially the very pure and bright-eyed. They set their sight on a sweet young girl (Reese Witherspoon) and set out to rune her life. The film is steamy scene after another, and includes an iconic make out scene between Gellar and Selma Blair.

Vince Vaughn is a womanizing unemployed actor is Los Angeles, during the weird swing revival days of 1990. An old friend (John Favreau) moves to LA to get over an ex. Vaughn introduces him to his nightlife ways and needs to get at “all the beautiful babies.” The film was a critical and commercial hit that helped launched the careers of Favreau (who also wrote it), Vaughn, Heather Gramm, Ron Livingston and director Doug Liman.

This 1975 film stars Warren Beatty as a sexpot hairdresser in Beverly Hills. He loves it because he is a super charming guy and this gives him the opportunity to meet and bed many beautiful women. Unhappy in his personal life though as he wants to set up his own salon. He turns to a lover and her husband for a loan and a long road of interesting situations involving multiple sexual partners unfolds. The film was called a stunning look at the sexual politics of the time and was nominated for a handful of Oscars.

Everyone though star Channing Tatum and producer/writer/director Steven Soderbergh were crazy when they wanted to make a movie about a male stripper with a heart of gold. They had the last laugh when this little film grossed $170 million at the WW box office. Tatum plays a green dancer that is taken under the wing of pro Matthew McConaughey. He teaches Tatum how to party, pick up women, and make easy money.

Will Smith is a charming “date doctor” named Hitch. His whole job is helping the socially less fortunate, work up the courage to ask women out. From the outside he is seen as a manipulative schemer, but he is generally a good guy that is just trying to help poor guys who can’t help themselves. While he tries to win love for others, he faces some romance troubles in his own life and has to use that confidence he is shown others, on himself. The payoff, though predictable, is very satisfying and make for a nice entry to the list of best womanizer movies.

A slick chauvinist executive (Mel Gibson) has everything going his way until a freak accident gives him the ability to hear what women think. At first, he uses his power for evil, convincing women to go to bed with him, but then for good. He realizes the error of his ways and actually fights for women, like the powerful one who stole his heart (Helen Hunt). Fun fact, this in one of the highest grossing romantic comedies of all time.

Two friends (Owen Wilson and Vince Vaughn) have had the same tradition for years. Come wedding season, they do their research, come up with fake backstories and they crash as many weddings as they can. To them, these are the happiest events of all time, stocked with free food and drinks, but most importantly woman looking to chase that same feeling. Their lives are filled with one night stand after one-night stand and they start to realize it may not be enough. A very funny film with an all-star cast to boot.