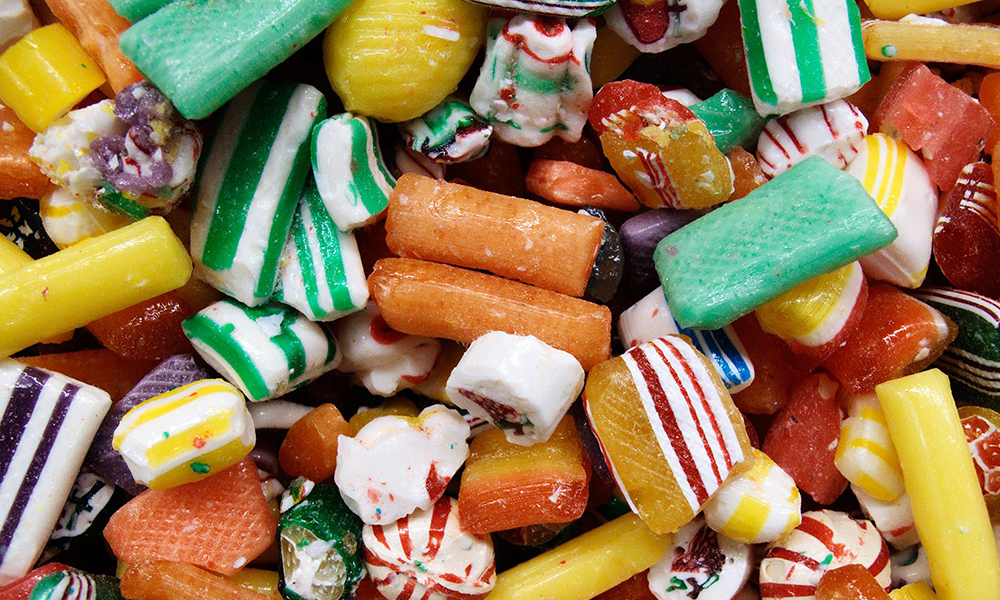 There are few things in our lives that are going to evoke nostalgia like candy from our youth. If you were lucky enough to experience one of the below you had a unique opportunity because this is a list of the most popular discontinued candy that for one reason or another can’t be bought anywhere.

Before they were a fruity candy like all other Wonka candies, the “Oompas” were a candy very similar to Reese’s pieces with a candy coating locking in delicious Peanut Butter and Chocolate, though Oompas were bigger. These were made in 1971, discontinued in 1983 and then revived in 2001 by Nestle as the fruit snack it is know as today.

This one is a bit funny because this white chocolate bar was pushed as this sophisticated older person’s chocolate bar and it had this wacky 1986 advertising campaign which can be seen here. The bar was sweet, delicious and had almonds but it wasn’t enough, and it faded out with the 80s. There is a massive online campaign to get this one back, so we will see.

This 90s delicious treat is exactly what it sounds like, Dr. Pepper flavored gum, and it was glorious. Not only did the flavors mesh really well, but it also had a liquid-y center surprise of DP goodness. The was such a magical combination, it was sad to see it go.

In the 80s Gatorade was soaring high, the sports drink was giving athletes the ability to do things they never dreamed and it was all the rage. To capitalize on that, the makers decided to put some of their classic flavors like lemon-lime and orange. It seemed like an oxymoron, gum quenching thirst, but it did and we loved it. This was another gem that faded away with the 80s.

Bonkers were like a starburst candy but they had a CRAZY liquid center in the middle with INSANE flavors. It was so Bonkers. The commercials were also Bonkers and that helped really fuel the popularity of this novelty, once they started to fade so did this candy. Another casualty on the discontinued candy list. That is until 2017 when Leaf Brands announced it would be bringing them back.

Originally made by the Walther H. Johnson Candy Company, the people behind Mounds and Almond Joy, this industry pioneer rolled off the line in 1920s and ran all the way until 1986. These things were huge, originally coming in 4oz which is bigger than a king sized Snickers. This was your classic chocolate, peanuts, Carmel staple was a crowd pleaser but after a third of a century, it just lost too much steam to the other guys.

Space Dust was supposed to be the psychedelic cousin of the Pop Rock. Of the sodium explosion candies, Pop Rocks came first, then Space Dust. Both originally owned by General Foods. The reason for space dust is that it used the extra stuff that was too small to be Pop Rocks, though it faded in the 70s. There has, however, been a resurgence in a new product called Cosmic Candy.

In case you couldn’t tell, these were supposed to be the “holes” that were missing from the center of the life saver. It was like the traditional Life Saver, but more young and fun. They came in pretty much the same flavors though. This was another classic example of low popularity leading to this becoming a discontinued candy.

Released by sports collectables company Topps, these plastic garbage cans in multiple colors surprise you with tart pressed-powder candies in fruity flavors offered up in classic garbage items like cans, fish bones and bottles. The novelty was fun for awhile but it wore off and became another discontinued candy.

This name came from the fact that it included different sections that contained Caramel, Cherry Creme, Fudge, Orange Jelly, Nougat, Coconut and Butter Cream all surrounded by glorious milk chocolate. While it seems like a mess, this treat, was loved by so many. Sold by the Pearson company in the 1930s, around 1979 the bar started to get pressure from the soft drink of the same name so retired the bar.

PB Max was a chocolate bar filled with peanut butter and oats launched in 1990 by giant candy company Mars. This one was incredible loved by the people and the only reason it was said to be discontinued was because of a rumor that the Mars family did not care for peanut butter.

Launched in 1973 by the Mars candy company, the Marathon Bar was a chocolate bar that was eight inches of braided caramel covered in milk chocolate. The length was a thing, the package even had a ruler printed on it. The classic was discontinued candy by 1989, but no worries, a rival company Cadbury launched the “Curly Wurly Bar” which you can get today.

The “Hollywood Candy Company” was almost a big dog in the candy world for most of the 20th century, but is no where to be found these days. The Minnesota company (not Los Angeles) launched their flagship bar, the milkshake bar, in the 50s. It was loved by many but got destroyed by the Milky Way and joined the list of discontinued candy by the 60s.

The Wonder Ball is an interesting story in that it wasn’t discontinued because sales were slumping or it was no longer relevant, this chocolate ball that contained toys inside was banned because kids were just biting on in and choking on the toys inside. This is why we can’t have nice things.

A Russian immigrant that moved to the US in 1917 formed Annabelle’s candy company in 1950 with a successful “Rocky Road” Bar. In 1978 the company picked up Cardinet Candy Co, the company making the Abba-Zaba Bar. They tried a version with chocolate, and while the flavor is unique and nothing like it has been made available since, it wasn’t as popular as some of the companies other bars and got cut.

In 1976, thinking the Baby Ruth candy bar was named after Babe Ruth, Reggie Jackson said, “If I played in New York, they’d name a candy bar after me.” Even though it was named after Grover Cleveland’s baby daughter, Ruth. A year after Jackson signed with the Yankees in 1977, the Curtiss Candy company introduced the Reggie Bar. A round candy bar of peanuts and caramel coated in milk chocolate. It was introduced in 1978 and retired to the discontinued candy hall of fame in 1982. Just five years before Reggie Jackson retired.